What are LED Shoes & Best Brands

In Brief: What are LED Shoes

LED shoes are shoes that contain LEDs embedded in the soles and around them in shoes. These LEDs blink as the shoe is subject to movement. The LEDs come in a variety of colors. The batteries that power them also last for a good while.

In 1992, the wildly popular sneakers, introduced in the late 1910s, underwent a delightful change. The result of this change was the launch of LED shoes.

Early LED shoes had LED lights embedded onto the soles of the shoes, especially at the heel. These lights came in varying, sensational colors which made the shoes look bright and striking.

In the present, LED shoes have made a comeback after a brief hiatus.

These shoes contain LEDs that are lodged all around the sole and that blink as the user walks, runs or moves.

The batteries for the LEDs last for a good while and may or may not be rechargeable.

How do LED Shoes Work?

The main components of an LED shoe are the LEDs, battery and a pressure sensor.

The pressure sensor senses whether the shoe is being worn or not. When the shoe is worn, the LEDs, that are powered by the battery, turn on.

The main working components of an LED shoe are the LEDs themselves, a pressure sensor, batteries and wires which connect all the components together to form a circuit.

When LEDs receive current, a voltage develops across the diode. When this voltage is equal to or higher than the working voltage of the diode, it produces photons.

The LEDs are placed in a clear window present at the heel and/or around the sole of the shoe.

Sometimes, they may also be placed around the shoelaces in the shoe’s upper.

The batteries are used for building up the required voltage across the diodes for the LEDs to glow. The batteries are implanted into the sole of the shoe. Thus, they generally are not replaceable.

The pressure sensor is placed in the sole, right beneath the heel of the user.

The pressure sensor senses whether weight is placed over it, that is, when the user is wearing the shoe. one the pressure senses this, the circuit is made and the LEDs glow.

The entire circuit is placed within the shoe’s sole so as to not cause discomfort to the wearer. 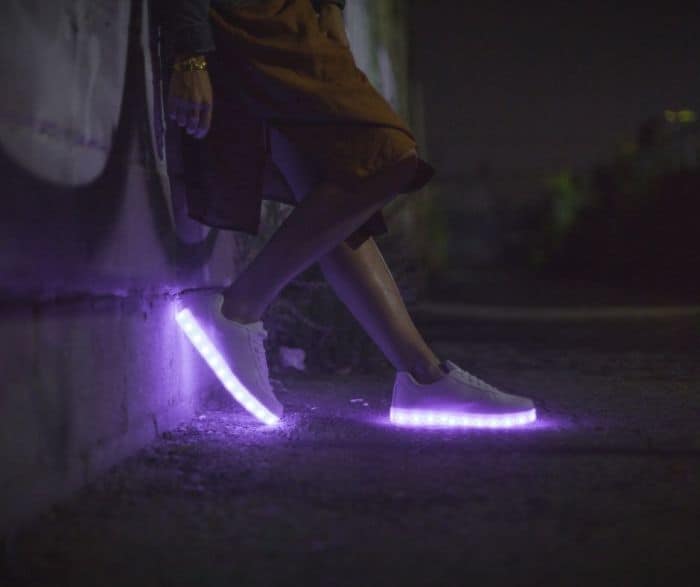 They are widely used by their main target audience, the children.

Also, due to their great aesthetic value, they are worn as a fashion statement. Runners and athletes also wear light up shoes when traversing dark alleys and to also notify vehicles.

LED shoes are attractive and make a bold fashion statement.

They have immense aesthetic value. This is why they are very popular among dance crews and performances.

LED light-up shoes are used widely by their target audience, children. From trick-or-treating to sporting events, LED shoes are preferred very much by this segment of the audience.

Adults, nostalgic for the LED shoes of the 1990s, also are very enthusiastic customers of these shoes.

Also, light-up shoes are used by runners, worn especially during darker hours for the lighting of dark paths and to notify oncoming vehicles. 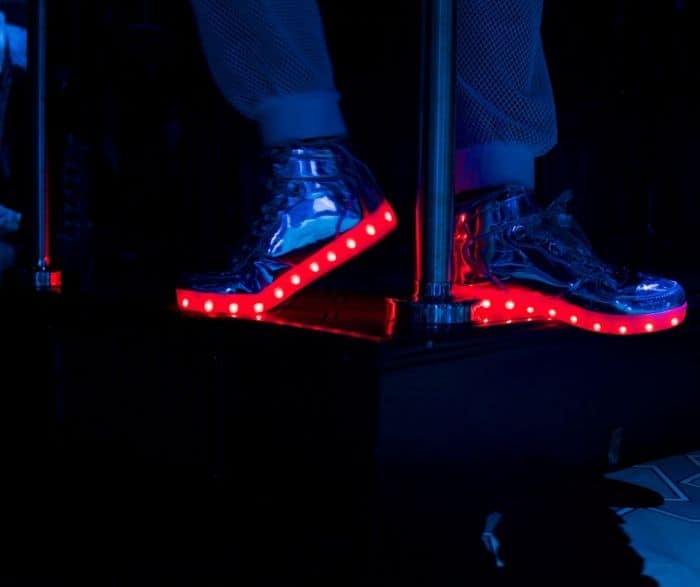 Okay, so LED shoes have some limitations.

Firstly, LED shoes have fragile components like the LEDs which can be broken easily when subject to heavy activity.

They cannot be subject to heavy activity or athletics. Sure, these shoes are used for late-night jogging and used by kids who normally have a very active lifestyle.

But if the shoes are subject to heavy activity, the LEDs may get damaged.

Also, most LED shoes are not waterproof. Although they can tolerate light drizzles of water, complete submersion into water or snow is not advisable.

The batteries in most LED shoes are not replaceable. Hence, if the battery runs out, these shoes are no better than normal sneakers. However, some shoes have rechargeable and/or replaceable batteries.

LED shoes are bright, bold and flashy and are widely used by their main target audience, the children.

There is no doubt that they look amazing, especially in the dark and can make a real impression.

We hope you are now more knowledgeable about these shoes. We would love to hear your feedback and views on LED shoes. Drop them in the comment box below.

Types of Shoelaces – When to Use What Type

QueryLane.com is a participant in the Amazon Services LLC Associates Program, an affiliate advertising program designed to provide a means for sites to earn advertising fees by advertising and linking to Amazon.com, Amazon.co.uk or Amazon.ca.